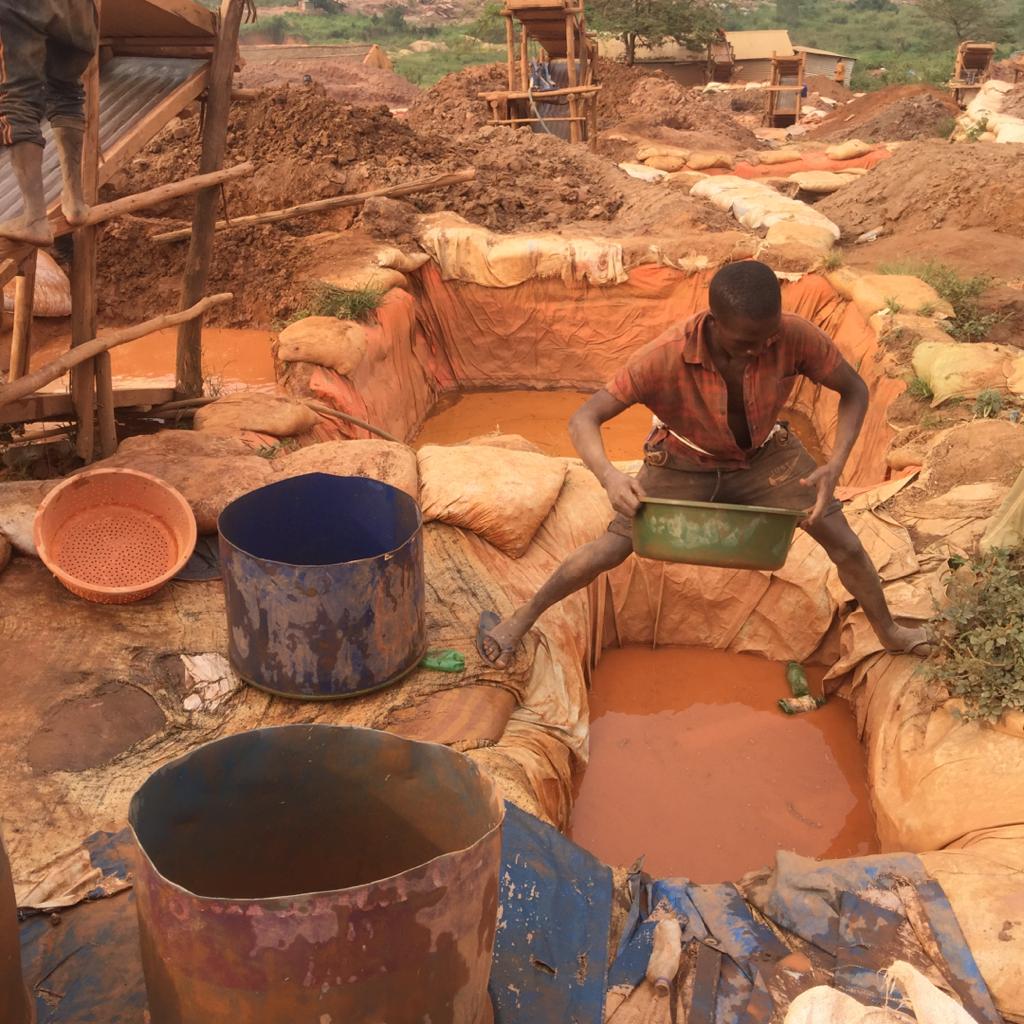 Artisanal gold miners in Kasanda, formally Mubende district are calling for more awareness and sensitization on other methods in gold extraction to completely phase out mercury use which is hazardous to environment and harmful to human health.
According to artisanal gold miners, most of them still use mercury in extraction of gold despite its visible dangers on their health and environment.
Ivan Kauma, a member of Kitumbi-Kayonzo Miners’Association (KKMA) in Kasanda says though borax method has been introduced, the miners are still stuck on old technology of mercury use which calls for intensive trainings.
Mr.Kauma explains that many artisanal miners are used to mixing mercury with gold ore before exposing the mixture to the heat to separate the gold from the rock. He explains that the miners are poisoned by mercury vapor released in the process of heating.
Bernard Mutesasira, another gold miner notes that most miners use mercury without protective gears and that the washed water polluted with mercury is just poured on the ground; contaminating the soil and underground water.
“Those who have been in the business have complained of absorption of mercury into the skin causing corrosive skin, headache, back pain and constant shaking which is highly attributed to the use of mercury,” Mutesasira says.

Joyce Katusiime, a woman miner dealing in buying and crushing the ore in Lubali mining site in Kasanda says though the demonstration on how Borax works has not yet been done, the theory trainings they have had so far show that use of borax is better if adopted by all the miners.
She explains that much sensitization is needed to ensure that gold miners work in a mercury free environment in addition to further awareness rising on the effects of mercury.
National Association of Professional Environmentalists (NAPE) with support from the Global Environmental Facility(GEF)-Uganda, a small grants program under United Nations Development Program(UNDP) has been working with other partners and government to reduce mercury use and promote use of borax as an alternative technology in Kasanda and other mining districts in Uganda.
Peruth Atukwatse, the officer in charge of chemicals management and climate change at NAPE is delighted that the artisanal gold miners now know and appreciate the dangers associated with use of mercury and are willing to uptake other safer alternative technologies.
She says the introduction of Borax is in line with Minamata Convention on mercury which was adopted in 2013. The convention, which Uganda is a signatory, set clear time-bound targets to phase out the manufacture, export and import of mercury and mercury added products.
Ms. Atuwatse explains that as NAPE, they aim at reducing the health and environmental risks of mercury and they will continue to sensitize miners on borax use until mercury use is completely phased out. She says borax is advantageous over mercury since the former increases productivity and high gold recovery that results in better overall economics of miners, borax is readily available on the market, cheap and its use in mining legal in Uganda.
The survey carried out by NAPE and other partners between July and August 2018 established that the levels of mercury pollution in the blood of miners, soil, and water and food crop contamination were very high in the mining districts of Busia, Buhweju, Mubende, Namayingo and Karamoja.