BUGANDA QUEEN ROOTS FOR END TO SINGLE USE OF PLASTICS 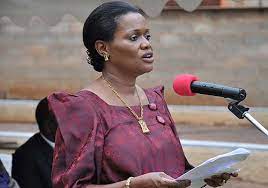 The Nnabagereka (Queen) of Buganda Kingdom Sylvia Nagginda has appealed for an end to single use of plastics to reduce on the adverse effects of plastics on the environment and human life.

While launching the Panel Discussion on the plastic pollution at Munyonyo Speke Hotel in Kampala at the climax of the flip-flop expedition, the queen appreciated the Flip-flop team for the great work done to preach plastic awareness in the region.

“To see our region clean and plastic-free one day, we need to start by increasing the knowledge and understanding of plastic pollution amongst communities,” explain the Nnabagereka.

Nnabagereka called on activists and community groups to join the struggle of ending single use of plastics. She explained that the major environmental problem of plastics in the lakes and Rivers can only be tackled through innovative technologies.

Flip-flop is the world’s first recycled plastic sailing dhow that has sailed on Lake Victoria, Africa’s largest freshwater ecosystem, taking its vital message up-stream and calling for an end to unnecessary single-use plastic.

Ben Morrison, the Chief Executive Officer of the Flip-flop project explained that the dhow was built to show the world that it is possible to make valuable materials out of waste plastic, and that single-use plastic does not make sense.

He said the voyage was meant to send  an urgent message to the East African community on the need to end the unnecessary single use plastic that is a threat in the region especially Lake Victoria .

“Sailing around the lake, we aim to inspire people to create their own waste-plastic innovations and adopt circular solutions that will build greener businesses, whilst also taking plastic out of the environment. Together with communities across the Lake Victoria region, we hope to bring awareness and innovative solutions to beat pollution,” Morrison said

Dipesh Pabari the project leader on the Flip-flop expedition explained that the aim is to make awareness to community leaders, conservationists, business leaders and policymakers, demonstrating alternate uses of waste plastic and other circular waste models, while calling for an end to single-use plastics.

The boat gets its name from the 30,000 recycled flip-flops used to decorate its multi-coloured hull.

“In my village, hundreds of plastic bottles are littered daily, I decided to transform the plastic waste in Mpigi greatly to reduced plastic pollution,” she narrated to our reporter.

Kyoburungi Gwendolyn the coordinator water resources institute at the ministry of water and environment explained that government had passed laws to fight against plastic pollution in the country.

“We are committed to fight against plastic pollution and will continue to work closely with the communities to find solutions to our ever evolving environmental challenges,” Kyoburungi said.

Louise Ellis the British Deputy High Commissioner to Uganda said fighting single use of plastics is what they have worked on for a while and pledged to continue to save the environment.

“Fighting single use of plastics will help us to clean up our towns, cities and beaches and will also improve how we recover resources, and reduce waste to landfill,” Louise said.

Louise encouraged all the community to join hands and fight the pollution adding that collecting the plastics can work as employment to the unemployed.