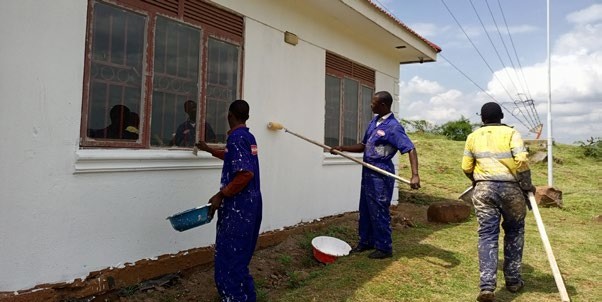 The Community Green Radio (CGR) based in Kiboga Town has received an all-round facelift aimed at boosting its corporate image and providing a conducive atmosphere for staff to work in and the listeners who are always hosted at the radio.

The CGR was started in 2014 largely with support from the Rosa Luxemburg Foundation but it was only in 2019 when it managed to get its own home in Kiboga in western side of Uganda. For infrastructure development, the CGR relies on donations from different entities and locally generated revenue.

For this current development, that involves painting the office block and furnishing it, the radio has received support from a NAPE project that is being supported by the European Union (EU). The project aimed at fighting gender-based violence and other human rights abuses is already using the CGR for community mobilization and sensitization.

Mr. Rajab Bwengye the coordinator of the EU Project at NAPE said, “The Community Green Radio is very important for this project. It is helping us to create safe space for victims of gender-based violence to converge and share their experience and then use its airwaves to highlight the problem and seek for solutions”

Allan Kalangi, the NAPE officer in charge of the Community Green Radio welcomed the support. He said that the CGR is committed to being a development partner of the grassroots communities in the region and acting as their mouthpiece in their quest for realization of social and economic justice.