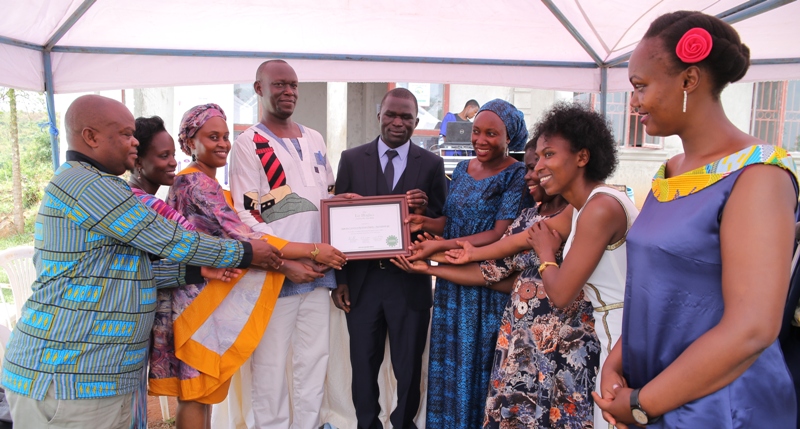 The NAPE Community Green radio has received the 2020 Liz Hughes award for her Farm Radio at a function held at the radio premises in Kiboga. Green radio won the award after beating other 59 radio stations worldwide. The award was handed over by Mr. Ecaat Stephen the Country Representative Farm Radio International to the NAPE Executive Director Frank Muramuzi and the radio staff on March 8th.
While receiving the award, Mr. Muramuzi thanked Farm Radio International for recognizing the efforts of the radio in promoting women. He promised more empowerment to women.
“We are so delighted that finally our efforts in amplifying the voices of women have been rewarded. We shall continue to give wider space to women to air their views”, Mr. Muramuzi said.
In his remarks, Mr. Ecaat said the radio won the award because they devote enough time to women issues.
“What made you stand out was the huge amount of time you give to women to discuss their issues. You have also allowed women to speak for themselves on radio”, he said.
Israel Yiga, the Kiboga District chairperson praised the radio for giving ample time to programs that address women issues.
“I have been listening to this radio and following the time they accord to women issues, this award is not a surprise to me. I implore them to continue promoting women issues”, the chairperson explained.
The award giving ceremony coincided with the International women’s day. The function was attended by local leaders and the radio listeners predominantly women.

Community Green Radio is one of the major programs of National Association of Professional Environmentalists (NAPE).The radio is an offshoot of the sustainability of the Sustainability School Program which works on empowering communities to identify their rights and entitlements and works towards attaining and defending them.
The radio is aimed at amplifying the voices of local communities in the eco-sensitive Bunyoro and Buganda Regions to effectively participate in natural resource management processes.
The Liz Hughes award was created by Farm Radio International to recognize radio programs that address the issue of gender equality and create opportunities to share the voices of rural women. Liz Hughes was a board member of Farm Radio International who was passionate about broadcasting and a champion of gender equality. The Canadian Broadcasting Corporation broadcaster helped Farm Radio International to develop its FAIR journalistic standards, which emphasize Fairness and balance, Accuracy, Integrity, and Respect.