I earn a living from collecting plastics-Kayongo 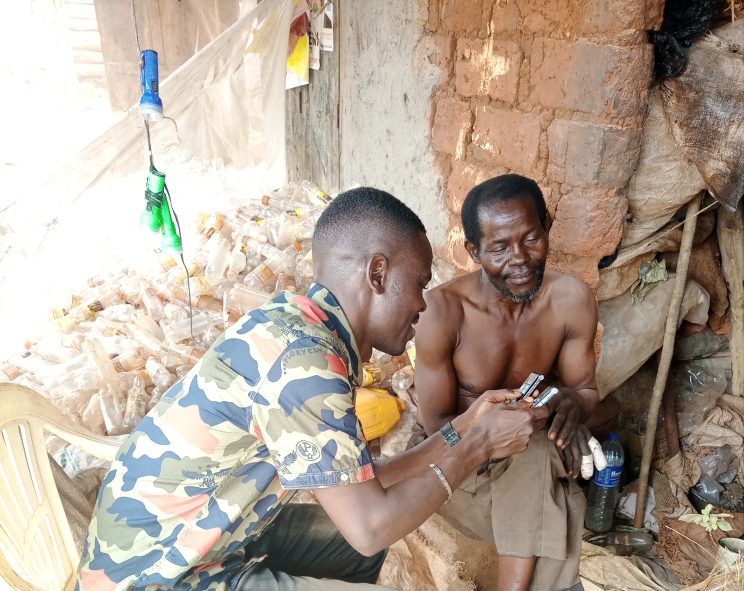 When Kayongo Godfrey took to the streets and dumping places in Kiboga district to collect used plastic bottles, many thought he was mad. They didn’t realize that Kayongo would use old plastic bottles to build a foundation for a better life.

53-year-old Kayongo was born and raised in poor conditions in the rural slams of Kiboga. He had little access to education. With other youths from the slums, he earns some money by collecting used plastic for recycling firms.

“This way, I developed an interest in recycling. I didn’t invest in capital for a recycling business,” Kayongo recalls.

“It was hard, I could not afford to hire people to pick up items for me, but together with my siblings, we collected bottles and washed them.”

Kayongo has been selling bottles to a growing number of recycling companies and mini-factories which actually have a high demand.

“Before I visited the companies where the plastics where taken I didn’t know that I was losing a lot to middlemen,” Kayongo recollects.

Kayongo got more orders from different companies specifying the bottles in their different categories.

In the meantime, he has built himself a three roomed house near his working place in Kyekumbya. In Kiboga District

“Since I had no job, in 2008 I decided to join waste collectors just to protect the environment and i had to support myself and my family. At the beginning I didn’t think that at one time I could earn something from the waste.” Kayongo said.

Kayongo is proud of his job.

“None of the district leaders has ever sensitized me on what to do as they usually say. it was my idea and a friend’s advice. I pick plastic bottles from various places like Masindi, Hoima and other districts near Kiboga”, Kayongo adds.

The recycle business improved his life and that of his family. His business contributes to environmental protection moreover.

Nakandi Zainabu the Kiboga District Senior Environmental Officer says the district set dates for sensitizing the community on the impact of poor disposal of waste, especially plastics. She says  more aquatic animals are now endangered due to the irrational activities of dumping plastic bottles into the river and streams.

On the motivation for the initiative, Nakanzi said the district wants to reduce the volume of plastic that is polluting our environment and causing diseases and other disasters.

Environmentalists normally do not like plastic and polythene products because they do not decompose.

It’s common to see used plastic waste littered on streets, gardens and runways, and even blocking the drainage system. People try to get rid of the waste by burning it, which results in air pollution and health hazards.

Only a small amount of plastic trash is collected and recycled.

The world’s first recycled plastic sailing dhow (a lateen-rigged ship with one or two masts) is hitting the Victoria waters again.

The dhow, which is going around East Africa (in the three countries sharing Lake Victoria), reached Uganda on Thursday 11th March 2021via Lolwe Island in Namayingo District.

The dhow named Flipflopi has been on sail since March 4, starting from Kisumu, Kenya, through Uganda and lastly to Tanzania, ending on April 1.

The expedition hopes to promote regional collaboration to address plastic pollution by bringing its message to the 10 different lake-communities in the three countries, while raising awareness and inspiring communities to adopt circular-waste solutions to beat plastic pollution.

To achieve this, the Flipflopi has been incorporated into the national water week events and the expedition has used this as the main angle in the hope of promoting circular solutions and call for an end to unnecessary single-use plastic in the region.

The official launch of the Uganda Water and Environment Week will be on March 20, at Speke Resort Munyonyo after the dhow has left Ggaba beach on the same day.

The Flipflopi, covered in 30,000 flip flops, first set sail on January 24, 2019, from Lamu Island in Kenya before crossing into northern Tanzania, with its final stop in Stone Town, Zanzibar. This trip was aimed at creating awareness on the more than 12 million tonnes of plastic dumped in the ocean every year.