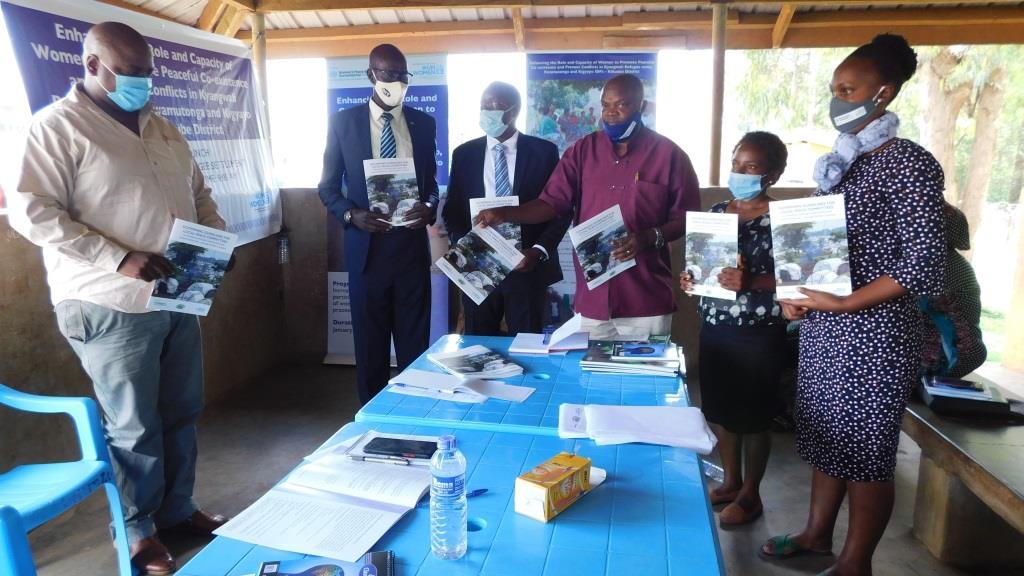 The project was launched in Kyangwali Refugee Resettlement Camp on June 2, where NAPE also opened a peace hub and also launched guidelines for Local Peace Committees that will help resolve conflicts and promote co-existence in the resettlement camp.

She explained that the peace hubs will be used to ensure that the conflicts among the refugees and internally displaced people are solved with the cooperation of local communities, leaders and other stake holders while sheltering victims of Gender based Violence.

“The peace hub is going to be a one stop centre for gender based a violence and natural resources conflict that includes land, clean water and firewood,” Akiiza said

Akiiza added that, “two more Peace hubs will be opened in Rwamutonga and Kijayo respectively and the Local Peace Committees that comprise of community members from these respective camps will help in resolving conflicts through dialogue and mediation,” she said during the launch.

Speaking at the launch, Frank Mulamuzi, the NAPE Executive Director said the project was established after realizing that people in the camps have failed to peacefully coexist and effectively use the natural resources due to differences in nationalities, tribes and norms and culture.

He said the project will help to resolve the conflicts through mediation with the use of local peace committees and local government leaders.

“In areas where there are Natural resources, government and other investors tend to mismanage the indigenous communities hence violation of human rights, displacements with less or no compensations, intimidations by security agencies and other forms of violations and as NAPE we are so much concerned,” said Mr. Muramuzi

He also expressed concern that girls and women are the most vulnerable and the project intends to increase the participation and decision-making of women in conflict prevention processes and responses.

“As NAPE we realised that women, girls and children are the most vulnerable so we have opened a peace hub here to handle all those issues for the betterment of everyone,” he explained.

Kebirungi Jolly, the Kyangwali Refugee Settlement Commandant under the Office of the Prime Minister said there have been conflicts over natural resources between host communities and refugees adding that the project is timely.

Kebirungi noted that Kyangwali settlement has several challenges connected to services offered to the refugees and the host communities and that the NAPE project on conflict prevention is relevant to the issues in the camp.

She added that it’s good that the project is 2 years a period in which the communities will be able to learn and acquire skills for sustainability of the project. She pledged support from the OPM office in ensuring the project objectives are met.

Peter Banura, the LCV chairperson for Kikube said the district is overwhelmed by conflicts over natural resources especially land and gender based violence. He said that it’s good the project is focusing on women who are vulnerable and marginalised in our societies because they also face challenges that range from rape to defilement among others.

He also stated “that Financial literacy should be emphasised to minimise conflicts that arise from mukopero’’ this is Money given to the refugees for upkeep and food from partners and agencies which has increased domestic violence in the camp.

The objective of the project is to increase meaningful participation and decision making of women in conflict prevention processes and responses.