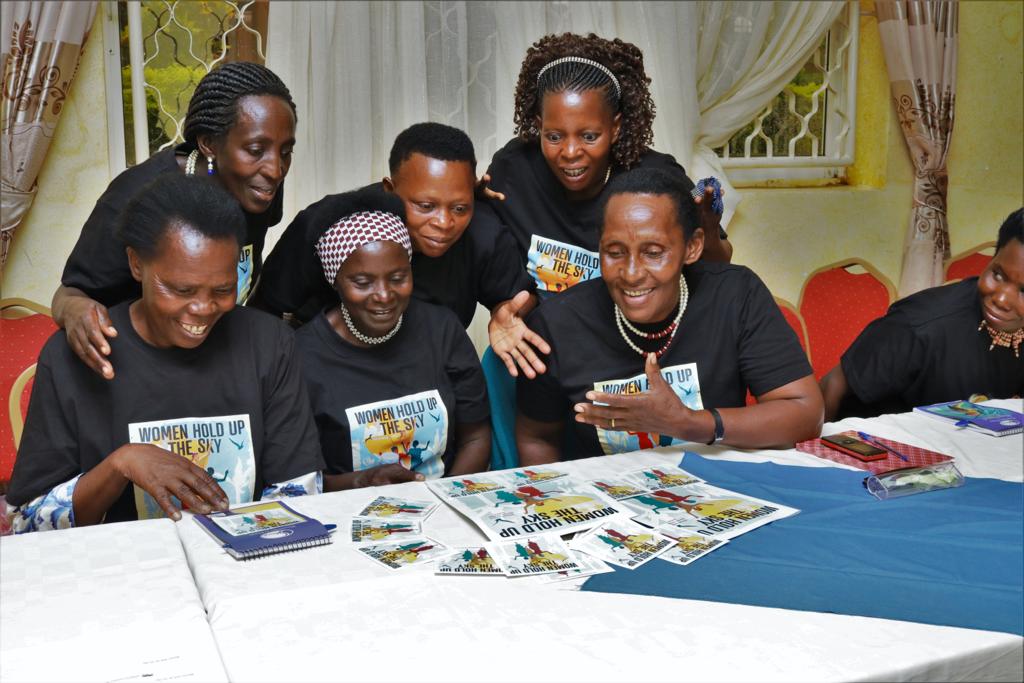 With some of the characters from Hoima and Buliisa, the documentary, Women Hold Up the Sky tells the story of how women activists affected by mining and other forms of large-scale extractives in Uganda, South Africa and the Democratic Republic of Congo (DRC) are deeply engaged in resistance and active struggle to take back the control of their land, rights, bodies and their lives.
“Now that we are back on the land, nobody should interfere with our rights as women. If they come to evict us again, we will die to the last person standing,” said Lucy Ongiera a community group leader for Rwamutonga women savings group in Hoima district in the film.
It reveals the experience and activism of women in the three African countries but tells a much bigger story of the ongoing exploitation of natural resources and marginalization of poor communities, particularly women.
“The oil companies destroyed our crops, driving through with the tractors, graders, wires and trucks. When they came to pay, I realized the money they brought was not the right amount, so I rejected it. When I complained, they said they don’t care. I went to court to sue them. And the case has been in the high court since 2011, motionless. We are like squirrels against an elephant because the elephant is huge and can run over you and squash you,” said Margaret Kagole, the chairperson of the TulimeHamu Mbibo Zakadde Women’s group in Buliisa, another character in the film.

The film that was done with support from the WoMIN-an, African Gender and Extractives Alliance, in partnership with the National Association of professional Environmentalists (NAPE) The Uganda film launch was attended by women affected by oil developments, women activists, government leaders who pledged to unite together to strongly hold up their struggles on land and their rights in the era of oil development.
“I have heard in the documentary one women saying that her husband was beaten and left unconscious during eviction in Rwamutonga. What if it was my husband, me who has no eyes, who can’t see? How would I have looked for him? Some of these real life stories make us emotional but it’s a lesson for us as women to stand up and fight for our land. We need to come together as women,” said Joy Nalongo Rufunda, the Chairperson of Blind women association.
Margret Kagole from Buliisa said women should not give up in fighting for their rights on land and be organized in groups to be able to have one strong collective voice.
“I thank NAPE for empowering me. I have been empowered to stand up and fight for what belongs to me. Like for my land case that has been in court since 2011, I think the people I am battling with have now feared me. They have started calling me for peace talks but I refused because I have my lawyer. I have heard it in corridors that I will be compensated. This is what we need as women. We hold on, we don’t give up,” Kagole said.
Bernadette Plan, the Secretary for Gender for Hoima District asked women to work hard and hold up to their struggles against the injustices that have come with oil development in the districtwith the sky being the limit.
Catherine Byenkya, the Minister for Health in Bunyoro Kitara Kingdom hailed NAPE for going on ground to bring out the untold stories of women. She asked women to work together as women and build a platform where the voices from the grassroots to national level can be heard.
“Thank you NAPE for loving women. Let’s work together as women to build ourselves. Let’s stand bold and speak up in defending our rights on land,” said Catherine Byenkya.
Sostine Namanya, the Gender and Food Security Officer at NAPE applauded women who took part in the documentary. She said land issues, environmental degradation and climate displacements affect women most and the documentary gives a lesson on what women face in other countries compared to Uganda and how they are taking on their resistance struggles.
She added that ‘’ Women hold up the sky’’ is a character-driven film about African women who are deeply engaged in struggles to take back control of their land, their rights, their bodies and their lives. The film tells us about women’s experiences and their dreams for development.

The film will be used by allies in the global North will use it for training, political education, lobbying and advocacy. The film will also be the centerpiece of a women-led women’s rights African campaign on fossil fuels, energy and climate justice.

The film will cultivate greater awareness of the costs of extractives-driven development, and its gendered costs, amongst civil society organisations and the wider public, and it will be used to advocate and campaign for the needed development alternatives to governments and multilateral bodies, like the African Union and the United Nations.

Find out more about the film here: www.womenholdupthesky.co.za