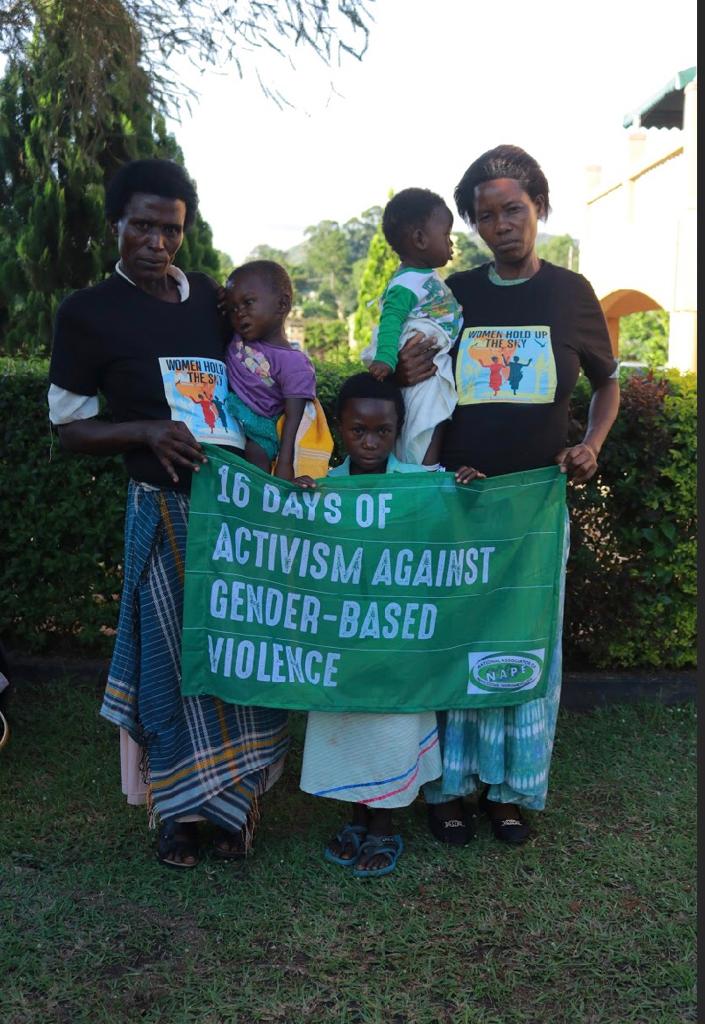 November 25 marks the International Day of elimination of violence against women, which begins the 16 world wide activism campaign against gender-based violence that goes up to December 10. The day is observed every year to raise awareness on the fact that women are subject to rape, domestic violence and other forms of violence around the world. Following on from last year, this year’s global theme once again focuses on violence and harassment in the world of work..
As one of the activities to raise awareness campaigns, NAPE organized media interactions with Women human rights Defenders (WHRD’s)in Bunyoro region to share experiences, strategies and struggles in the face of violence against women.

The women expressed concern over the rising over rising cases of gender based- violence that often go unreported fear to speak out, impunity by perpetrators and gender inequality.
Peninah Ruhindi, a woman activist from Kigaaga in Kabaale Sub County in Hoima says the compensation of persons affected by oil developments has triggered violence in the oil-rich region as men want to take control all the compensation money.
Harriet Kemirembe, the chairperson of Kijayo camp of people who were evicted for Sugarcane growing in Kijayo in Kikuube district says many women who have undergone sexual harassment and rape in the camp have suffered in silence due to fear to break their marriages and shame. She says women are instead freeing their homes in the camps due to the psychological torture they undergo. “Women fear to pass through the sugar plantations because they have been raped and sexually harassed by the employees in the sugar factory but they can’t speak. Where do you start from? Even back in the camp, we are sexually harassed by our husbands in the face of our children due tothe nature of the makeshift huts we sleep in. A man wants to have sex with you when the children are listening. It hurts,” she said.
Jenipher Beitwamaswa, from Navigators of Development Association (NAVODA), a community Based Organization in Hoima says efforts to take up legal actions on sexual harassment and rape have become hard because the victims fear to speak out to give evidence.
“There is a case of rape from Kijayo camp that we were following where a man pushed the woman out of the house only to be raped by the sugarcane workers. However, we failed to take it on because the victim has failed to speak out,” she said.
Despite the challenges, women activists who have been empowered by NAPE are coming up together as a collective power to mobilize other women in communities to speak up in the face of violence. They say through their women groups, they talk about the challenges affecting them including gender-based violence and how to find solutions.
Evas Katusiime, a resident of Kakindo in Buliisa says violence is used as a mechanism that suppresses women yet women have equal access to resources, opportunities and services as men. She said women should join groups to be able to stand together to fight the challenges.
“I thank NAPE for empowering us, it has opened our eyes. Gone are the days when women were violated against and remained silent because there is widespread advocacy through trainings and forming groups. I believe together, we can speak up and fight for our rights,” Katusiime said.
WHRD’s urged the government leaders to prevent sexual harassment in the workplace by putting in place and implementing sexual harassment policies by regularly and promoting the policies, translate into relevant community languages. Put in place reporting mechanisms and promote gender equality. Provide regular trainings and information to women workers and activists.
Women human rights defenders like Evas face many risks to protect their rights, so NAPE and its allies will continue standing in solidarity with women in addressing violence through sensitization, amplifying their voice and bring out the untold stories that women and girls face.